The minimalism and the warmth of the chimneys for city

In our experience as architects and interior designers in Barcelona , we have met clients who are located in an urban domain and wish to have a fireplace with the warmth of the rural style without renouncing the elegance of the minimalist style. A fireplace that materializes in a minimalist style in the key of homey warmth.

With this idea in mind, in Coblonal Interior Design Studio we find interesting the concept of adding this typically rural element in an urban environment, so that, by decontextualizing the object, an opportunity is presented to redesign the object and find new combinations, both aesthetic and functional.

Under this premise, throughout our architecture and interior design projects we have found a combination that is interesting to us and are the modern chimneys in urban homes. So, a warm element such as the fireplace is integrated into a minimalist style, resulting in an interesting element of contrast.

The fusion of minimalist design in a fireplace

Is the minimalist style at odds with the home’s warmth? In our study we think not, and that the coldness typically associated with minimalism – due to neutral colors and the least amount of elements – can be balanced when designing the project, resulting in a visual and balanced harmony which translates into relaxation.
As an example, in this project of integral reform and interior design in a duplex in L’Eixample, we opted in its day to integrate a gas front fireplace into the industrial design of this urban dwelling.
A fireplace with a modern minimalist design, characterized by the enclosure by means of a glass partition.

The set has a simple design, where the rectangular shape of the chimney is integrated into a gray panel. The element of warm contrast is found in the fire itself and in the skin of the sofa that is placed in front of the fireplace. All these apparently antonym elements merge to result in a visual balance thanks to the ‘cleanness’ of minimalism and the warmth of the fireplace. Once again, colors, textures and visual weight are combined in architecture and interior design.
Another example can be the fireplace of our interior design and decoration project in a flat in Sant Just. 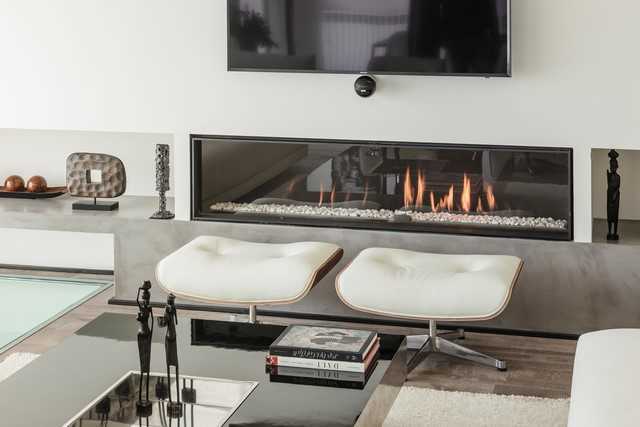 The same rectangular scheme in the gas fireplace is surrounded by functional elements such as the television. Warmth is added to the set thanks to the minimalist vintage design of the stools that invites you to sit in front of the fire and enjoy.
On the other hand, houses in the city can sometimes have a lack of space. A space that can be solved thanks to the integration of an element that separates the environments.
This is the case of the double-sided fireplace of our project Interior design, decoration and reform of an attic in Sant Gervasi , which is embedded in a wall and articulates the passage as vertex. This way it fulfills double function: to separate and to acclimate with the chimney.

As you can see, the minimalist style can be a solution to integrate the warmth of a fireplace in your urban home; where a modern gas fireplace as a simple frame, can be balanced thanks to the punctual use of elements that bring warmth, it can be a sofa, a painting or the use of materials and textures.

On the other hand, in addition to supposing a decorative advantage, the gas fireplaces that we propose you to use in your city house, present many advantages at a functional level since the gas fireplaces have the advantage that there are no remains of ash, you should not load wood, do not require much maintenance, it is not necessary to contemplate the capacity of the chimney, and do not involve excessive spending.

We hope that these recommendations through our architectural and interior design projects, have served to explore a little more the possibility of integrating a modern and minimalist fireplace in your home, and so you can enjoy your home as your refuge of peace … since that’s what architecture and interior design are all about, do not you think?