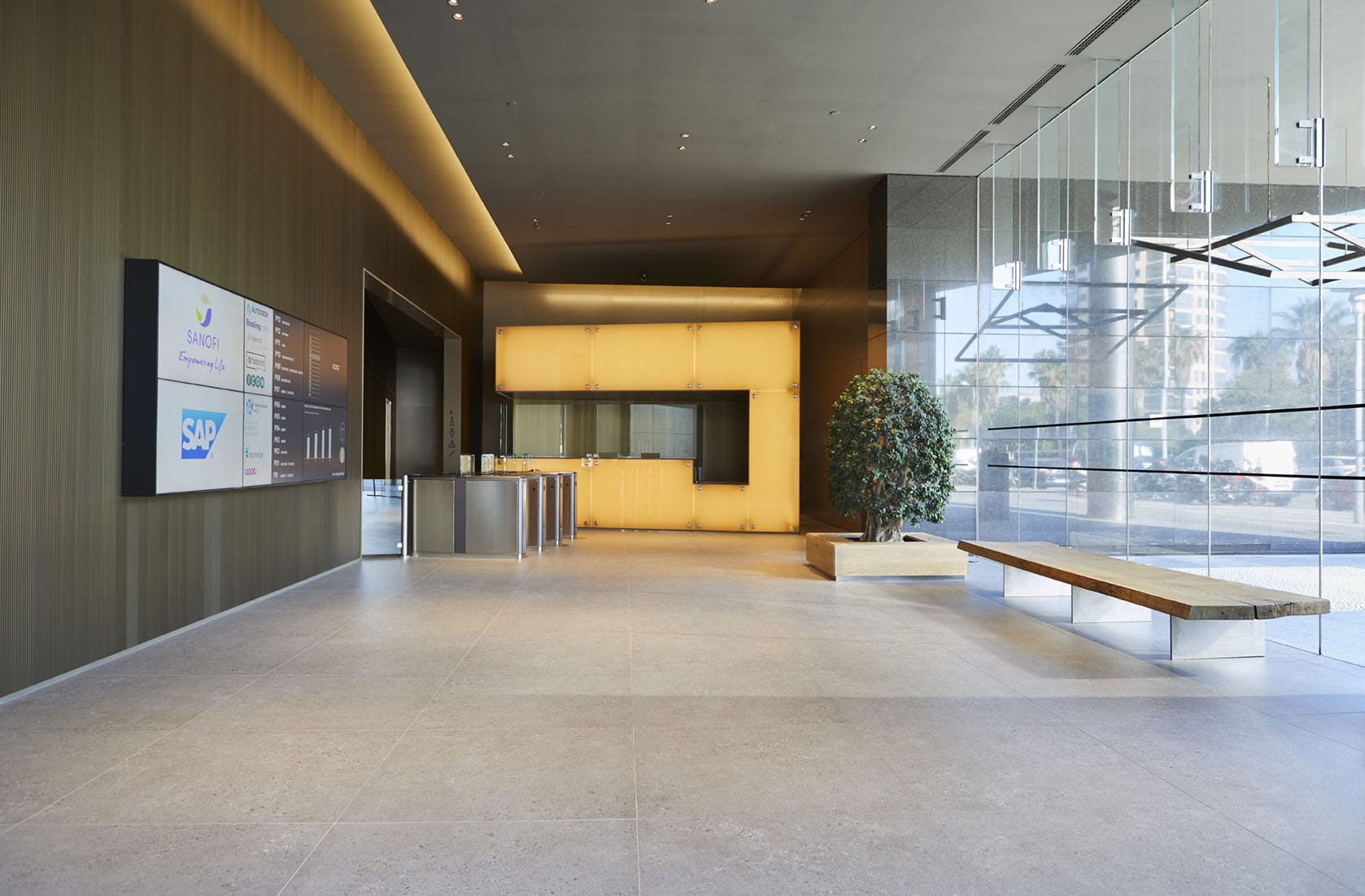 
This time Coblonal Interiorismo and Octavio Mestre Arquitectos, OMA, once again collaborate in the renovation project of the common areas of the Torre Diagonal Mar B1 office building. If in 2016 we took care of renovating and renaming tower B3 the Emotional Seasons Building, this time we have completed the remodeling of the common areas of Tower B1 in two phases.

Coblonal has been successfully in charge of the executive production of the project to remodel the common areas with the complexity of not hindering the normal operation of an office building that, under normal conditions, houses more than 1500 professionals a day.

Our interventions have focused on the renovation of various facilities in the reception hall, as well as the ground floor and each of the fourteen floors of the building.

The reception box covered with retro illuminated panels gives the building a more sophisticated and modern image. The large videowall at the entrance provides updated information on the directory of companies and events that the building houses and reinforces the technological nature of the facilities. The hall flooring has been renewed, as well as the paneling of the walls covered with gold anodized aluminum panels on an earthy base. Above the access door to each of the offices, a 37 “content screen displays the name of the company that occupies it.

Likewise, all the toilets have been completely renovated, both the entrance itself, which incorporates a screen that updates the availability of services with icons that follow the renewed signage of the building, and the interior. The new design of the bathrooms for men, women, and the disabled follows the aesthetics of the common areas and has taken into account sustainability criteria and energy and water-saving both in its conception and in its final disposal.

The new toilets are characterized by a large set of juxtaposed vertical mirrors that incorporate in an integrated way, both the taps, soap, and alcohol dispensers as well as the automated hand dryer with optical detectors to be activated only by placing the hands under each of the indicators. Under the long Corian sink, we have located a longitudinal bench in black, which serves as a support to leave the bag while you wash your hands. The placement of a floor-to-ceiling mirror broadens the feeling of space and returns the full-length image to those who use the services.

Special mention deserves the lighting of the different spaces, formed as a whole by led luminaires, which either in the form of a spotlight or in longitudinal strips make the wall coverings live or indicate the direction of movement in each of the spaces. They also incorporate volumetrics that allow energy savings when they are not necessary.

In short, it is a project of great technical complexity in planning given the full occupation and intense activity of the offices during the course of much of the execution of the work.