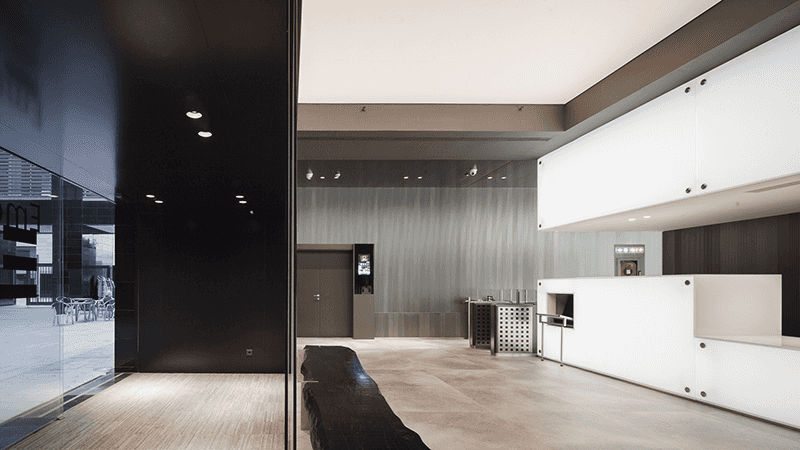 Essence of the project

The renovation of the common areas of the Torre Diagonal Litoral B3 located in the Forum area of ​​Barcelona was a success in meeting the expectations of our client, a demanding real estate investor group .

We won the contest to develop and execute the project of interior design and remodeling of several spaces of the building.

It was substantially important openning the lobby to the outside , as we live in a city focused on the sea, sunny and that gives off heat and light.

The offices Torre Diagonal Litoral B3, were outdated for a real estate investment group such as Union Investment Real Estate Group: the common areas of the building presented up to six or seven finishes of floors and false ceilings, in the same space, and generated a certain visual chaos, a certain heaviness in the design and a certain confusion; they required, therefore, a new design and interior design </ span> that fits the new times.

Functional needs of the reform

The interior design of this project comprised modifications to the main facade of access; interventions and improvements in the main lobby of the building; renovation in all lobbies in front of elevators, elevator cabins , as well as toilets ; plus a renewal of the lighting of the areas to be intervened.

The main need at the functional level was to make improvements in the routes inside the building, mainly from a accessibility and security . The installation of lathes and technological improvements , to solve the problems at the level of efficiency of a building that seeks to adapt to the new times.

The most important element to be highlighted at the functional level is the lobby element of the lobby, which centralizes its functionality, makes backlit lamp and in turn fulfills the functions as digital directory of the logos of the clients that have their offices in the Emotional Seasons Building; is a volume of large dimensions that contains the lighting , and which is transformed according to the seasons of the year .

Aesthetically, this interior design project aims to clean elements rather than add them, eliminate visual noise, look for a neutral, warm and temporary background , because the best way to not go out of fashion is to not be influenced by fashions… Always looking for the maximum dimension of the spaces , enhancing the diagonals and symmetries that suggest the gravitational center of the entire space, and thus comply with the current aesthetic values ​​according to the users of the building.