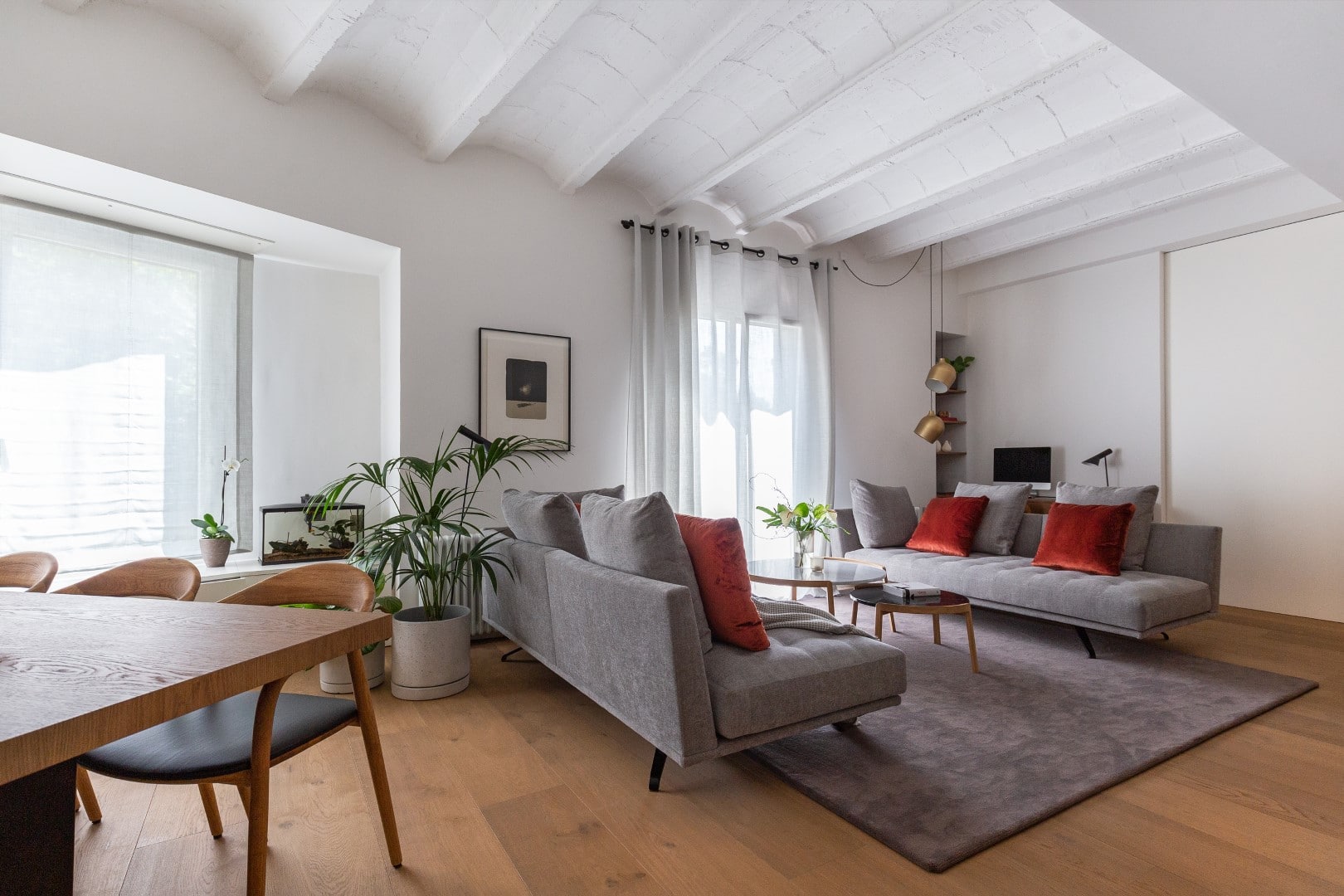 Coblonal Interiorismo has been in charge of the comprehensive reform and interior design of this apartment with views of Passeig de Sant Joan in Barcelona. The result is a bright home, with a distribution thought to the millimeter and materials and furniture that combine a soft, comfortable and functional base, with elements that give it character and power.

Our clients had bought the apartment because the original layout of the house apparently suited them. It is an apartment located on a typical corner of the Barcelona expansion area. A fact that implies a certain complexity in the design of the distribution, but at the same time, it offers light and exit to the main facade through several spaces. They were only thinking of making some minor modifications and renovating facilities, coatings, kitchen and bathrooms. However, when we got to work together, multiple distribution options came up that made our clients change their minds.

Paradoxically, the more complex a site is, the more options come out. And this was the case. Many alternatives came out and little by little we were fine-tuning the best option. This was characterized by conceiving the set formed by the living room, the dining room and the kitchen as a central square, the meeting place and family life, surrounded by the rooms. On the one hand, the master bedroom equipped with a bathroom suite and dressing room; and on the other, the rooms of the two young children.

From the front door, we come to a small hall that gives access to the kitchen on the right-hand and the second bathroom, and also the children’s rooms. Of these, the one that leads directly to the living room has a large white lacquered sliding door that, once closed, gives the impression that it is just another wall and a feeling of spaciousness when open.

The living room is the central area of ​​the house

The set formed by the living room, the dining room and the kitchen revolves around a fundamental piece in the project. It is the “box” that separates the kitchen from the living room. On the one hand, it incorporates the TV and storage cabinet and, on the other, kitchen furniture. It also incorporates two sliding doors that allow you to completely close the kitchen if you want to reduce the nuisance of noise or odors. The kitchen has 2 different entrances with sliding doors that are imperceptible when open. The entrance that gives to being is inserted inside the cabinet / box. While those in the corridor, when opened, transform the corridor shelves into two display cabinets. All are doors designed to remain open most of the time, offering a perception of open space, as a whole. But despite this supposedly sought effect, that in certain circumstances the doors could be closed, it was essential, since it allows to maintain activity in the kitchen, while the children sleep. Well, for work reasons, the family’s hours are not always the most suitable for rest.

The living room offers three areas with differentiated functionalities. In the first place, the living room, where two Casadesús’ Marlow sofas in gray velvet, facing each other and separated by two Bolia coffee tables, in marble and wooden structure, put the interaction of the television at the forefront. However, the television is located in this centerpiece, between the kitchen and the living room. Second, we find a small study facing the wall that overlooks the children’s bedroom, where those who work reduce the distractions of daily activity. Third, at the other end of this central square, we find the dining area, characterized by a large table with a wooden top and an iron structure in conjunction with the pendant lamp. Both pieces were designed and produced by Coblonal. On one side of the table, we find three Artisan chairs with an exquisite touch and, on the other, a bench that allows us to gain a few centimeters in width and conditions of use that are especially suitable for the children of the house. A low cabinet under the window offers even more storage and a privileged viewpoint to the daily activity of Passeig de Sant Joan.

A private suite for the bedroom, dressing room and master bathroom

The master bedroom has an attached dressing room that connects to the main bathroom that provides service. The three chambers are conceived as a private set for the use of the couple. The bedroom receives natural light from the main facade on Pg. De St. Joan and has ample storage both in the closet at the foot of the bed, as well as the trundle bed. The changing room is designed to be able to have all the clothes in use of the season with easy access. In the bathroom, the porcelain tile cladding stands out, giving it a solid style that is supposedly reminiscent of a spa to promote relaxation and disconnection.

The kitchen opens to the rest of the house

The kitchen is a large space with a dining table that also acts as an extra work surface. The kitchen reproduces on a small scale the shape of the floor of the apartment and the two entrances are key in its conception, from the hallway and from the living room. The kitchen is designed to be used as an isolated piece from the rest of the house, closing the doors well as another space for passage and social interaction when the doors are open.

Finally, just to the right of the entrance to the house, we find a small hall where a large mirror designed and produced by Coblonal Interiorismo stands out. From this point, we access a small junk room with generous storage that overlooks the laundry room. And it is that spaces like this, despite not being very glamorous, are essential in order to ensure the functionality of the set and become essential in family life.

A project designed to last

Both in terms of the distribution, the functionality of the different spaces, as well as the style of the finishes in coatings and furniture, it can be said that this apartment is designed to last

Absolute certainty is impossible, but we can make a good approximation with respect to the activity and propose quality materials that resist the passage of time and at the same time are valid at the level of style. Lighting is a good example. We can find a collection of emblematic design pieces that will hardly go out of style.

Photographs by Sandra Rojo and video of Aguacate y Mango, in which Joan Llongueras and Núria Fernández tell us some details of the project.