Exploring the aesthetic possibilities of the stairs

The staircase is an element that, far from being just a functional piece, becomes an interesting dynamic actor both at the esthetic and utilitarian level.
Perhaps this dynamism was the one that led Escher to draw infinite stairs in an almost obsessive manner. In Coblonal although we do not reach that point … (or yes?) We confess our weakness on the stairs and its infinite possibilities for its integration in the interior design, either by its aesthetic or functional meaning.
As you can see, the stairs turn a very interesting actor into the articulation between architecture and interior design. In this sense, today we will focus on its use from an aesthetic point of view.
Do you want to know how to turn the ladder into a decorative opportunity? In today’s article we give you some clues so that you get the most out of this interesting item.
Before you start …

What types of stair design exist?

The answer can never be definitive, since continuously variations arise in line with the space they link.
In any case, we can distinguish 4 base or canonical stairs according to the purpose of your project of architecture and interior design, and are the following:

The ladder as a leading piece

The ladder, although it is considered as a non-place as a place of passage, can at the same time represent a central aesthetic role in the decorative conception of space. Throughout our career and as a basic principle, we believe that places of passage do not have to be in tune with beauty. The choice of materials and their specific design can lead us to reserve a completely protagonist role in the scene.

An example of this may be the ladder of our project house in the Baix Empordà where the crystal panel framed in aged wood adds robustness and organic appearance in accordance with the set, where a magnificent picture on the reception table is also highlighted.

Rehabilitation and interior design of the house in Baix Empordà

This great frame in the air, with the contrast of the textures of the glass and wood adds a warm touch to the stairs, as well as being a security element. Once again, the function can surrender to beauty.

If in the previous project the contrast formed the soul of the project, in the case of Can Casi Hotel in Regencòs , Baix Empordà, the stairs follow the same decorative scheme, to create a stay with a smooth and harmonious aesthetic, despite its imperfection and natural asymmetries of the materials used.

The stairs, in addition to its plastic dimension, can also be enhanced as an almost sculptural element. An example of this is the stairs with stepped steps,
A minimalist and spectacular option that will surely not leave anyone indifferent. 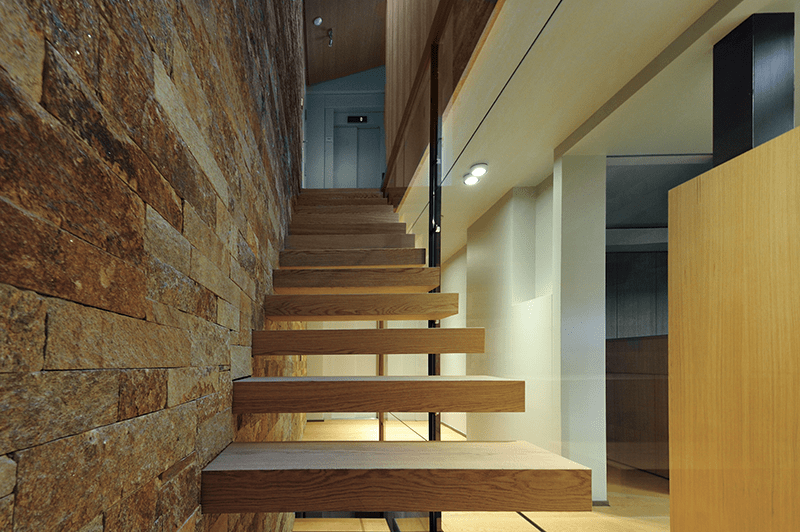 Interior design and decoration in Andorra

Do you want to go further? Try playing with the lights, to take the most monumental side to your stairs.

As you can see, there are a variety of options for the stairs to become a decorative element, it will all depend on your vision and needs to turn your house or space into your favorite corner of the world, or so we conceive it in Coblonal … where imagine spaces and build ideas.