Children’s bedrooms: Creative ideas to take advantage of every millimeter

Children’s bedrooms are especially sensitive spaces, as the most important people in the house rest, play, investigate, learn and grow in them and around them.

The children of the house are a becoming. The toys that are essential today, the following year will be forgotten; from listening to nanas to a pajama party; to paint and color to study with a computer; from simply getting dressed to getting ready to go out … and all these changes only in a few years.

In this perspective, making good use of space is not only a matter of centimeters, but also of time. The multifunctionality, modularity and the use of materials and motifs chosen in perspective are aspects to consider in order to carry out a successful design.

For all these reasons, designing, furnishing and decorating the room of the smallest of the house becomes a challenge for any interior designer. It is essential to create a safe and comfortable space for your children where, in addition to playing and studying, they can store all their clothes and toys. 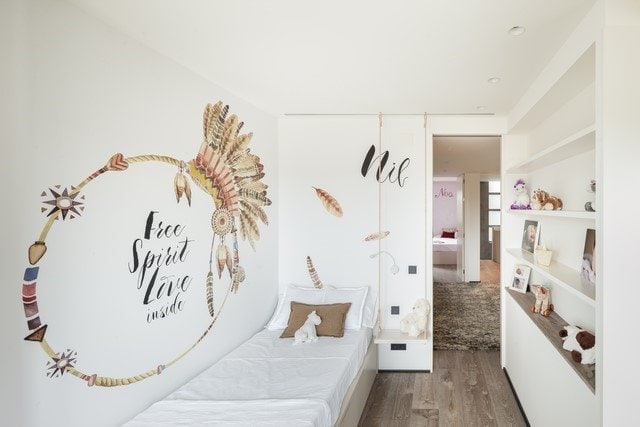 Apart from what is strictly functional, it is of vital importance that the little ones can be carried away by their imagination and fantasy during their childhood. That is why, in any interior design project that includes children’s rooms we must take into account that it must be a space, not only in which they can play and study, but also in which to develop their own universe personal.

However, if we want to take every millimeter of the children’s room, we can gain space from not only the placement of the furniture, but also the design of the space itself. If we are lucky enough to be able to completely reform our home and configure a new distribution more adjusted to the real living conditions of its members, we can rethink the situation and dimensions of each of the rooms and spaces taking into account what will happen in they both in the present moment and in the immediate future.

A good example of modularity and adaptation in anticipation of the inevitable changes that every child will experience are the semi-shared rooms that we project and build for a couple of brothers in the interior design and comprehensive reform project for a single-family home in Sant Cugat . 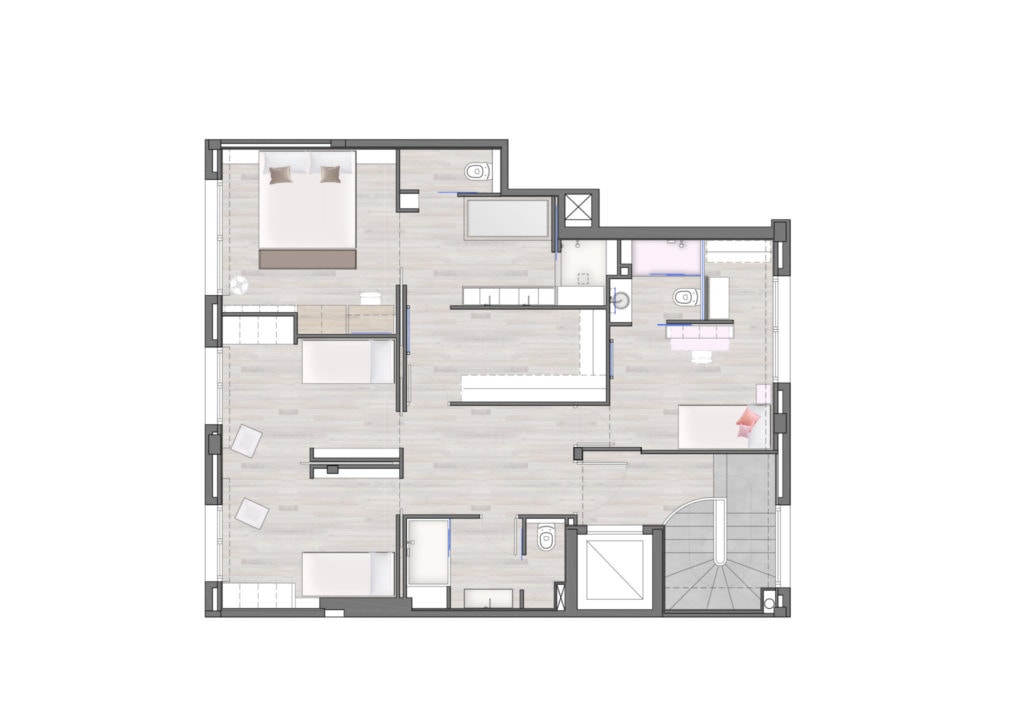 In this case, we chose to propose two contiguous and symmetrical rooms, both with their own entrance door and exterior window, connected by a large sliding door.
With the door open, it is inserted into the wall that divides both rooms. The rooms are connected in the same space to share space and games at younger ages and company, study or hobbies in adolescence.

With the door closed, we have two perfectly equipped single rooms that allow each of the users of the rooms to be intimated when necessary. This is essential when adolescence appears or at an early age when colds or other common diseases abound.

It should be mentioned that this distribution is designed so that the door is open most of the time, thus maximizing the perception of space in the whole. If the door is open it disappears leaving a single U-shaped space of large dimensions. The room of one brother is also that of the other. Or in other words, each one shares a common space with the other.

It is a highly recommended option for brothers who have many years left in which to share games or receive direct care from parents. A room designed to share, but also to evolve and meet the needs of privacy without having to give up other spaces of the house.

It is usual to think about a reform when the children grow up, but in a few years it will no longer make sense when they go to live, study or work away from home. If you have the opportunity, it is worth being a projectionist and designing a room that maximizes its useful life, covering the entire period that children spend at home, from childhood to youth, to even become a guest room when it is no longer is it so.

The children’s rooms are a becoming, in the same way as the people who inhabit them. Babies, boys and girls, adolescents and young people in just 20 years that allow us to think long-term solutions instead of facing changes every few years.