The Cesta Milá, designed in 1962, is a creation of Miguel Milá and it all started when the designer found an opal globe (a typical white glass sphere of the illuminations) that was abandoned in front of the glass factory. 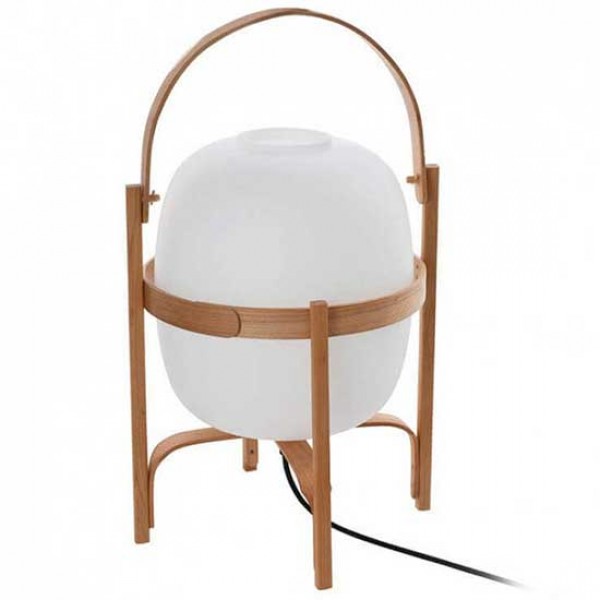 From this globe found by chance, the author was inspired by the traditional lantern that is responsible for illuminating coastal homes, country estates, and open terraces, to design one of the most iconic lamps of his creations.

This basket is made with a cherry structure that protects the balloon from bumps and also acts as a light diffuser.

The production of this lamp and the assembly is done manually. Its manufacture is entrusted to European artisans, who bend the wood by vaporizing the material, polish it carefully and assemble the pieces with consistency.

She is the little sister of the Milà basket and her balloon can be found in a glass or white plastic, to better resist the stumbling blocks of children.

Be this is the portable version of Miguel Mila’s iconic basket and it differs from the rest because it has no cables and includes batteries for easy transport.

It is the metallic version of the basket that rests on steel bars and has a leather handle.

She is smaller than her older sister and does not carry a handle. On the margin of the glass ball, only the metallic structure that supports it is visible.

Is the version of the Milá basket to hang on the wall. A support hug the crystal ball to hold it and keep it from falling.

It consists of the same concept as his older sister, but with smaller dimensions.

Miguel Milá is a Catalan designer born in Barcelona in 1931 who began his career in the 50s as an interior designer in the architecture studio of his brother Alfonso and Federico Correa.

He is a nephew of Pedro Milá y Camps, a person who commissioned Gaudí with the design and construction of Casa Milá (La Pedrera).

Soon he began designing furniture and objects of all kinds and began producing them through his company Tramo, founded by two friends, the architects F. Ribas Barangué and E. Pérez Ullibarri.

Shortly after, he would work from his own design and interior design studio. Very related to the designers of the time, would found ADI FAD with André Ricard, Antonio de Moragas, Oriol Bohigas, Alexandre Cirici Pellicer, Manel Cases, Rafael Marquina, and Ramón Marinel·lo, among others. An association that since the beginning is dedicated to the dissemination of Spanish design outside the state borders and connecting young professionals abroad.

In 2016 he received the Gold Medal for Merit in Fine Arts by the Ministry of Education and Culture. Apart from this award, he has won several ADI awards in Barcelona, ​​the National Prize of Design (ex aequo with André Ricard), and the Compasso d’Oro of ADI in Milan throughout his professional career.

The basket and the basket are recurring pieces in our projects. We love its simplicity and delicacy. Well, there are pieces that convey more than what you see, that manage to transform the whole. And the basket is one of them.

A bright penthouse in the Putxet neighborhood