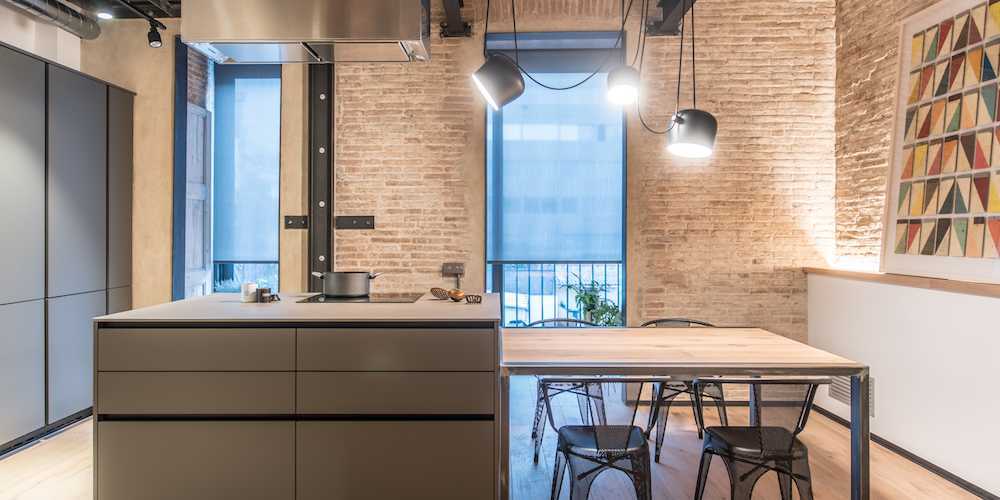 Modern and Industrial Apartment in Gracia

This interior design project has been designed to design an apartment for visitors who want to rent to spend a season in the city of Barcelona. For this reason, the Coblonal Interiorismo Studio has wanted to create a exclusive space that falls in love just by seeing it, and denote a style of its own, that is to say, that whoever occupies it will make it his own instantly.

Our interior design offers an open distribution where the location of the elements organizes a space divided into two large areas, through the block formed by the bathroom and the hall. On the one hand, the social area with lounge, dining room, kitchen on island , study and window-greenhouse; and on the other, the rest area formed by a bedroom with ample space to dress and relax in complete interaction with the bathroom, creating a dressing room with a very open and modern interior design at the same time.

As for the materials we have used for this interior design project, we can see how the pavement marks this articulation that divides the whole. The bathroom and the hall show a hydraulic pavement inspired by the one originally used in the building, and on the other hand, we have chosen a parquet natural with a lot of character for the rest of the rooms. The black iron sheet and the brick seen at half height illuminated from a perimeter perimeter, give the space a lighting very cozy environment. It is characteristic of this project the multitude of original elements that we have tried to rescue and sublimate in order to provide a specific character to the apartment. These are moldings, reclaimed wooden doors, sinks or pavements, which have a great personality and interior design of each of the rooms.